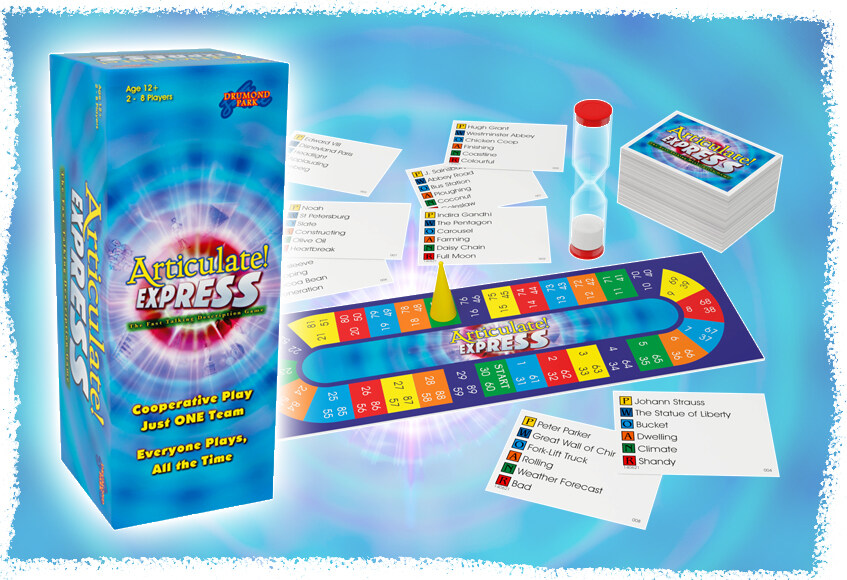 If you’ve been browsing your local John Lewis recently, you might have noticed an unfamiliar new Articulate game…

Articulate Express is a quickfire, everybody-plays-all-the-time version of the classic game. You’ll find it in a cheerful blue box that’s a little more unusually oblong than the original, sized about half-way between a traditional board game and our popular mini/travel versions.

And as well as being a great game in its own right, Articulate Express replaces the old Articulate Extra Pack #1. You can ignore the new board and rules, and simply use the contents as brand new extra cards for your much-loved original game of Articulate.

We’ll try to explain the background to this…

The Articulate Extra Pack was available in a cards-only format for some years. Sales were reasonably OK, but not massive – after all, it was a product only of interest to a sub-set of existing players. This meant that most retailers were a bit reluctant to stock it. So it got a bit lost out there, in the big wide world.

Hence a rethink on our part. By taking the best of the extra cards and reworking them as a stand-alone game, we can provide a product that’s attractive to major retailers. Which opens up opportunities for impulse- or gift-purchases, in addition to you wonderful hard-core Articulate enthusiasts.

More to the point, it means – thanks to the laws of economics – that the new game can actually retail for a cheaper price than the old cards alone.

Although we’ve refreshed any out-of-date topics, if you already have the Articulate Extra Pack then you probably won’t want Articulate Express (except to give to all your friends.) In this case, we’ll point you towards Articulate Your Life or Articulate Phrases.

But if you’re an Articulate player and want the new challenge of describing the Extra Pack cards – pop along to John Lewis to pick up an Articulate Express set. Remember: it’s blue. And oblongy.