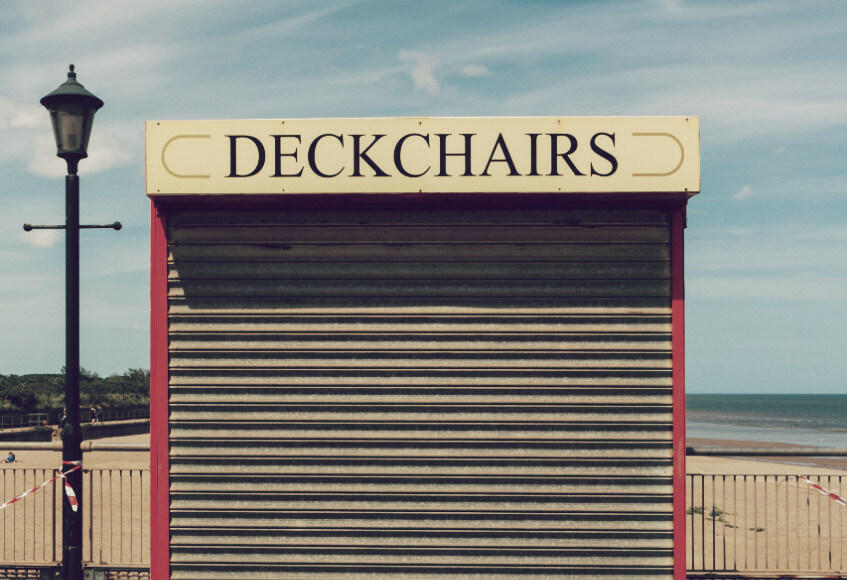 How many bits of wood in a deckchair? (And other Best-of-British-style deckchair trivia)

It’s one of those question cards that have players waving their arms around in furious gesticulations. How many bits of wood ARE in a deckchair?!?

(“No, look – there’s the rail on the top then the rectangle goes down to the front legs, then there’s another rectangle at the back that adjusts it; the one you trap your fingers in, and…”)

The answer’s ‘eleven’, if you haven’t already googled a picture.

There are three hinged rectangular frames: the bit you sit on; the bit that supports your back; and the bit that adjusts it. That last frame is open at the top, however, which is where most people go wrong.

If there’s any item of furniture that belongs in the Best of British board game, then surely it’s the quintessentially British deckchair. Set out in orderly ranks along the beach on an August scorcher; sand between your toes as you nuzzle your Mr. Whippy and fiddle with the knotted handkerchief on your head.

You can still retrofit your garden with proper deckchairs: no nonsense designs from Argos, or funkier chic from John Lewis. But there’s no denying that the items are old-skool these days, at least where the British seafront is concerned.

Changing tastes have played their part in this, of course – there was a story that one major seaside resort junked an immense annual deckchair-rental income following fears that their beaches were looking a tad old-fashioned.

But massed deckchair rental was, above all, a practical solution to a problem of the early-to-mid twentieth-century. Tourism had become a thing: to the seaside; to big outdoor events; to the Royal parks. But nobody to speak of owned a car – and there was a limit to what they could carry on the train or the charabanc.

(Think of that, the next time you complain that your ultra-lightweight moon chairs take up half the boot space in your SUV).

They might not be mainstream anymore. But they’re brilliant examples of design and practicality. So we’re proud to include the Great British Deckchair in another Great British Icon: the one-and-only Best of British Board Game. There they will join seaside rock, cups of tea, phone boxes, lollipop ladies and the rest… available at a toy store near you!