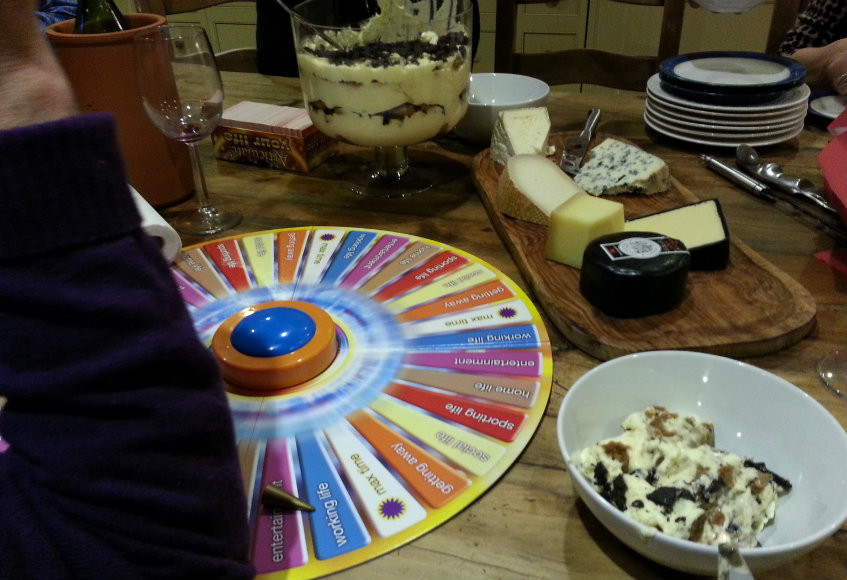 A short break for cheese and tiramisu

It's the best of three. Which gives you a natural time to break for some more food, just before commencing the crucial decider.

'Some more food' in this case meaning a good old feast of fine cheese and/or a bowlful of tiramisu. (Strictly speaking, and as you may have spotted, it's more of a a fusion tiramisu-cum-trifle, but that wouldn't have made a snappy headline.)

We had two teams of five for this particular challenge. As seasoned Articulate/AYL players will recognise, one of the fun things about playing in a larger crowd is the huge variety of different approaches to the game: the gabblers, the clinical describers, the brain-freezes, the ones who persevere with their description when they should have moved on to a different card ages ago. On this evening, we had a particularly expansive hand-waver, with the inevitable subsequent dry-cleaning bill for the lady sat on his right. And we were all... ummm... 'of a certain age,' which meant that the game began with a frankly undignified scramble for reading glasses.

The electronic timer makes Articulate Your Life even more frantic than its elder brother, Articulate. There are two reasons for this. Firstly, it introduces an element of real panic as the clock runs down; clinical Articulaters might be able to haul their focus away from the egg-timer in the original game, but that is simply not an option here. And secondly, there is always a big cheer as the 'out of time' sound-of-doom rings out. If there is not a big cheer then you are probably playing with the wrong people.

Drumond Park insider tip: KEEP YOUR EYE on your opposing timer-operator. As we all know, the game can get competitive, and you'll want to be alert for any monkey business. Sneaky finger-removal before the two-second period is up to allow you 'max time' is a classic dodge that you'll want to be wary of.

And break for cheese and tiramisu at some point. That's important. In fact we might put that in the rules when we next reprint them.