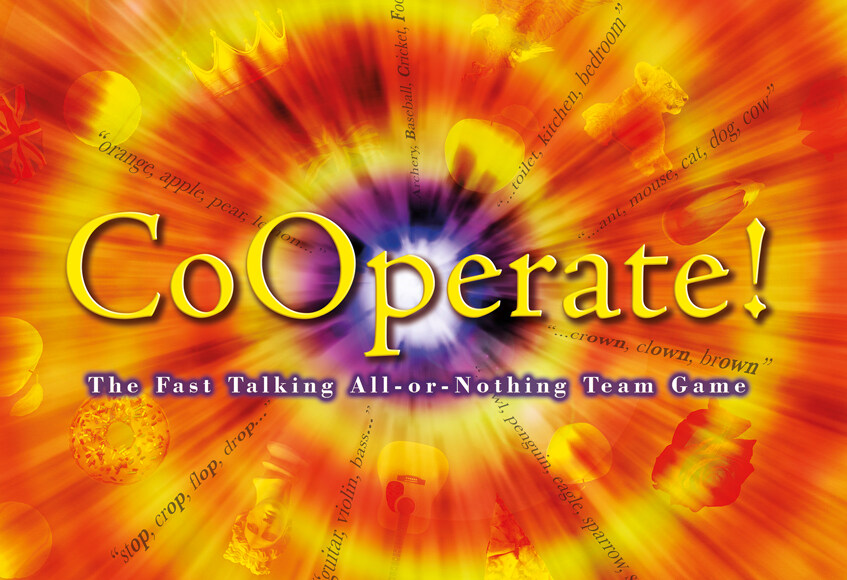 The brand new creation from the Articulate team is starting to wheedle its way into the shops. Keep a look out for a familiar looking box! It’s like Articulate, but orangey.

(We use the word ‘wheedle’ because we’re not immune to the stock delivery issues across Britain at the moment. A bit more about that at the foot of this blog post…)

WELL. The first thing we’d say is that if you love Articulate then you’ll double-love CoOperate.

All in a good way, of course.

On the other hand, there’s more collaboration between teammates, and an all-or-bust gamble each turn. You’ll have to agree amongst yourselves whether to play ultra-cautiously or ultra-recklessly.

In place of Articulate’s ‘topics’, CoOperate brings you four different types of challenge card, depending on where you land on the board. So, one minute your team might be scrambling to name as many ‘foods eaten by the slice’; then you may be tongue-tied with ‘cities further south than the previous city’.

And, of course, there’s a whole lot of ‘describing’ in there…

You can choose between three modes of play, to suit your preferred hullabaloo level, and to work best with small or big teams. Like Articulate, CoOperate is riotous with large groups of family or friends – but equally as shouty with four people playing as two pairs.

And, also like Articulate, the game’s just as funny – better, even – when at least one of the players is utterly, embarrassingly, hopeless at it.

Off to the shops? If you manage to bag an early version of the game – congratulations! You have a rarity. There were a couple of fairly clunking typos on the first batch of the boards, and we would normally have sent these to the recycling plant before they hit the stores. But given the well-publicised issues with industry supply chains at the moment, we've decided - after much agonising - to release them into the wild. They don't affect the gameplay one jot and we're doing everything possible to help retailers to avoid shortages of our games.

(We appreciate that some people get irritated about such things - in which case, our Customer Services team will gladly replace your board with a new one. For everybody else: if you've ended up with one of these sets, we're in the entertainment business after all. Enjoy a small extra chuckle at our expense. We'll happily take it on the chin, whilst continuing to reflect on the challenges of the past couple of years...)

Want to see the game in action? Follow this link for our online CoOperate sampler!