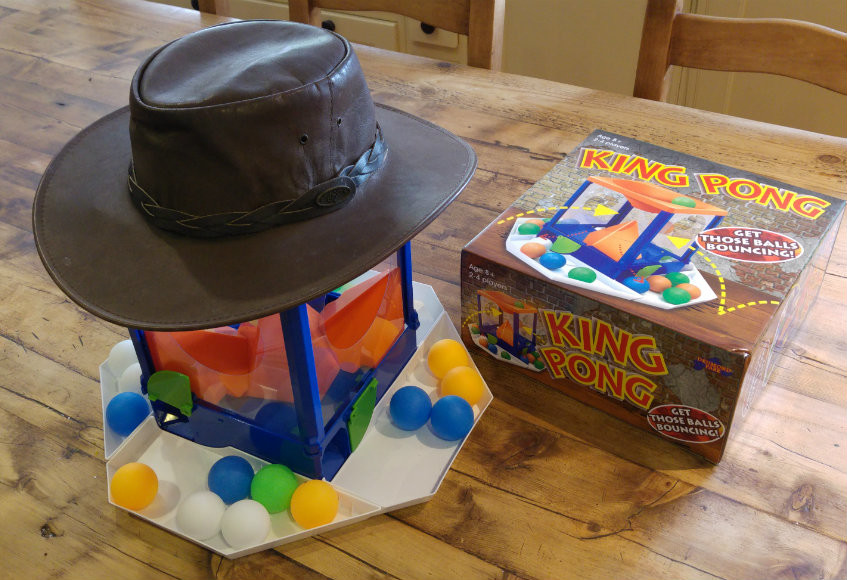 It's the brand new, stupidly addictive game, craze and challenge for Christmas 2017. But King Pong is extra-unusual as far as our award-winning games go, in that – in addition to the ‘official’ instructions – we deliberately encourage you to create your own house rules and games-within-a-game.

So you can play solo. You can practice. And you can mod the game to foil the over-competitive player AND LET'S BE HONEST EVERY HOUSEHOLD'S GOT ONE.

Close off the top hole.

There are two techniques to master for the successful Ponger: the low, skiddy bounce through the side hole, and the higher bounce into the top. So how about closing off that second route?

This is easy as easy could be. A piece of card, a plate, the King Pong box itself… In the main picture, our set models a very fetching Australian bush hat.

Set up a board for rebounds.

Perfect for solo Ponging. A flat sheet of board or wood – anything with the requisite bounce factor. Or simply site the King Pong unit against a wall. Here we’ve employed a cardboard box that was sitting around just begging for imaginative recycling.

You can place the board opposite younger King Pongers (giving them a second chance if their ball passes over the unit). Or use it to make the game more difficult for certain players (insist that their shots bounce off the board rather than falling directly into the top hole – you can move the board as far back from the unit as you like... it'll still work). Or simply set up a board to keep the balls from heading off into the kitchen when you’re practising on your own.

Balance something on the unit.

Want extra help or an extra challenge? We’ve used two featherweight plastic cups as an example; they might help you bounce into the top hole, but knock one off and it’s your responsibility to replace it whilst the others continue playing!

These cups are at the easier end of the scale; try a couple of marker pens balanced on end – the lightest brush from a Pong ball will send them toppling and lose you a few precious seconds.

Rather than recapturing errant balls yourself, take it in turns to go collect missed shots for their owners. You can assist all players equally – or use this as a way to help and encourage younger Pongers. And on that note…

Somebody getting a little carried away in the heat of battle? Well there are plenty of cures for that sort of behaviour. You can move the unit to be closer to (or further away from) certain players. You can simply start them off with more balls.

Or you can cordially invite them to don gardening gloves or (as pictured) a thick leather gauntlet. The consequent escalation of difficulty is guaranteed to wipe any smug smiles.

Tape off the front hole.

Which brings us full circle back to hole-blocking. A strip of parcel tape is ideal for this purpose. You don’t need to cover the entire hole, just enough to make it trickier for the player facing the tape. It’ll peel off easily after the game, and in extreme circumstances can be reused to forcibly silence any excessively boastful winners. 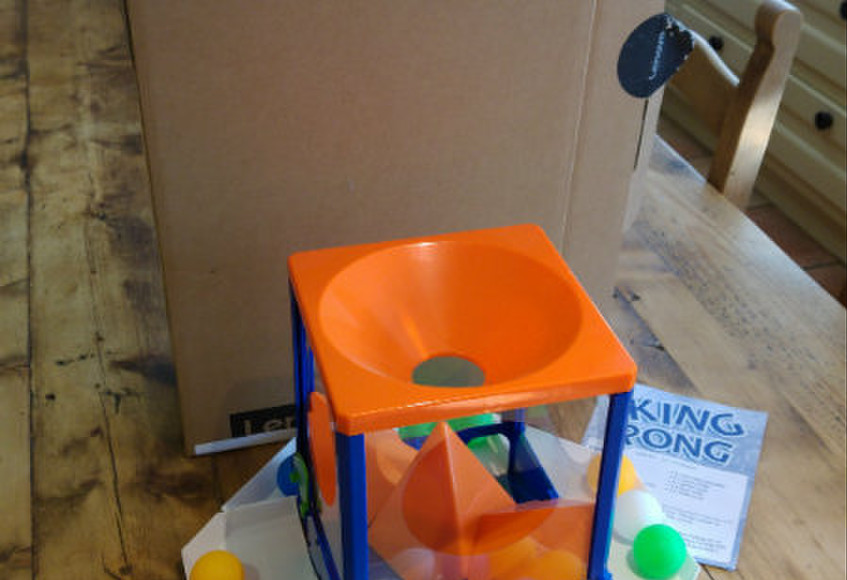 Our sophisticated rebound board 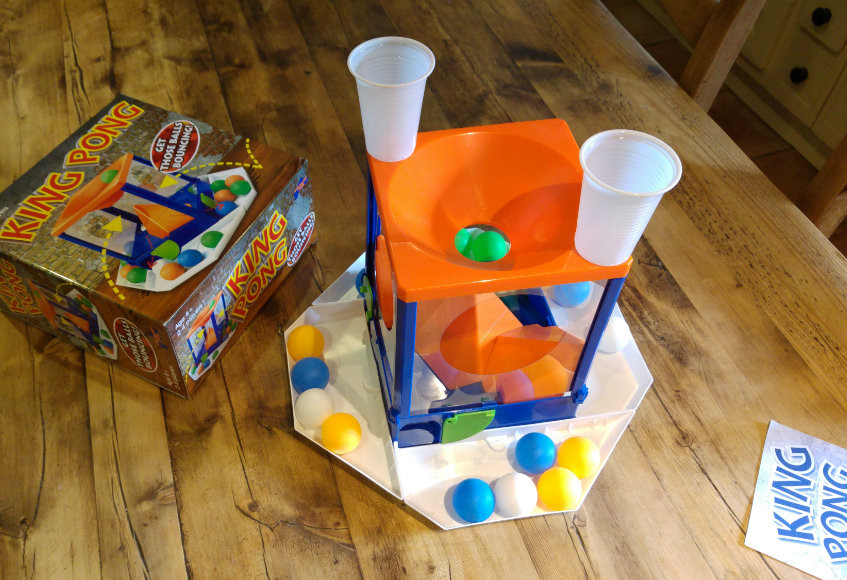 Knock off those cups and lose time replacing them... 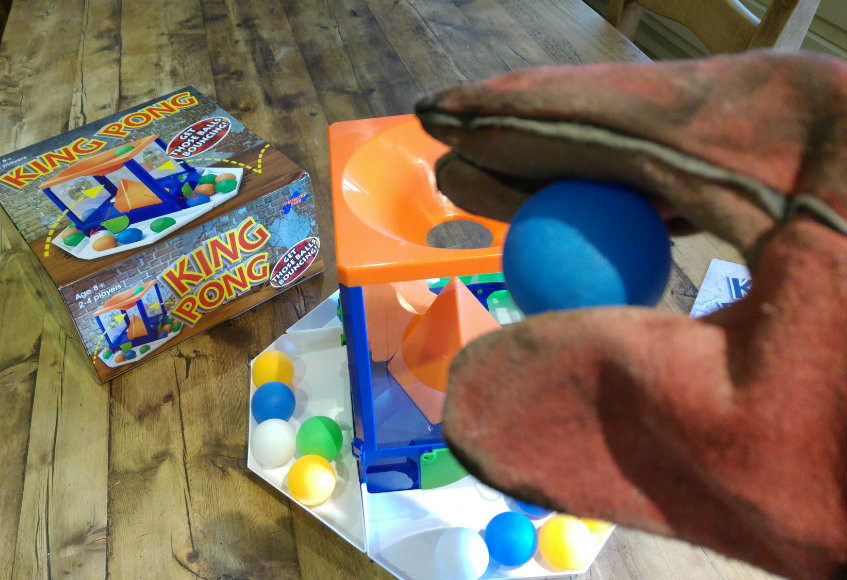 A handicap system in action 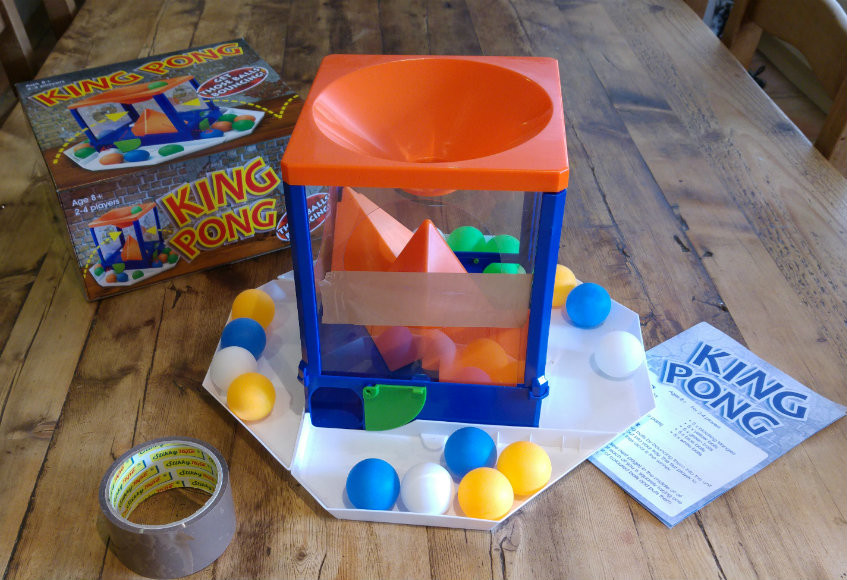 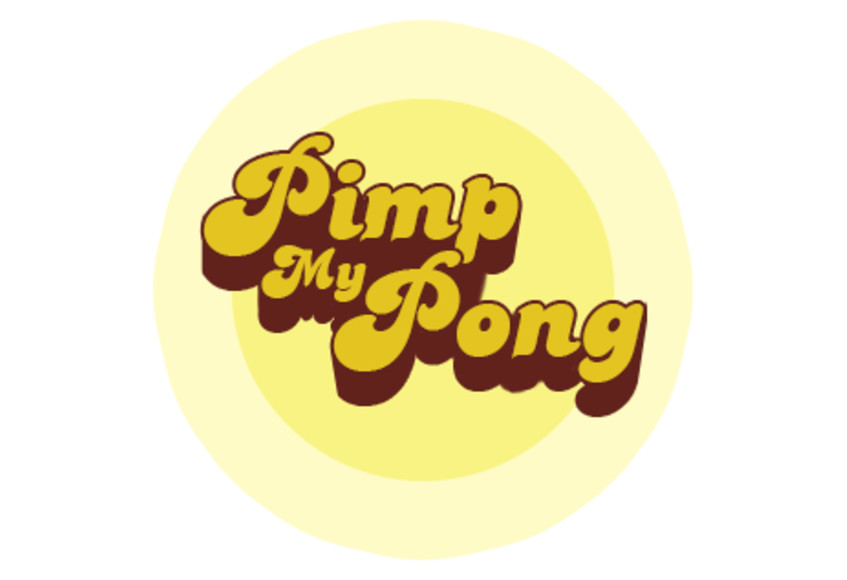