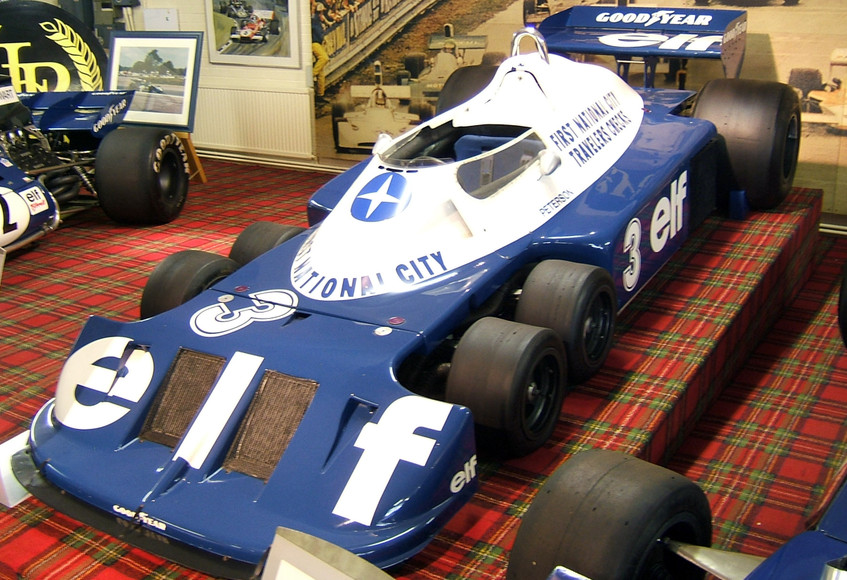 When people contemplate the topic of ‘cars with an unusual number of wheels,’ they generally alight upon one particular auto. Yes, the Reliant Robin and its family get all the love. Deservedly so, in the main – the Reliant is a true British icon and gets its own question in the board game; we may examine it further in a future blog.

But for now, let us celebrate that short period in the nineteen-seventies when a select group of British innovators went the other way. If four wheels were standard, three could be seen to be downmarket. Six wheels would surely be better?

The Tyrrell P34 made its Formula One debut in 1976. There were sound technical reasons why developing a six-wheeled racing car was a promising idea, but to be honest we weren’t greatly interested in them at the time; a six-wheeled racing car was quite simply the coolest thing on our new colour TV, and we wanted one for our Scalextric set. Yes, Thunderbirds and Lady Penelope had already done the six wheel thing with the FAB1. But that was just a model. This was the real thing.

Paying close attention to the Tyrrell was designer and innovator Robert Jankel. Jankel was founder of the Panther Westwinds car company, one of those quintessentially Best-of-British niche car manufacturers of the era. On the hunt for a new concept, Jankel resolved that what the world needed was a six-wheeled ultra-luxury road car; one that might casually potter along at two hundred miles-per-hour at around six mpg. The ‘Panther Six’ caused a sensation amongst impressionable readers of ‘The Observer’s Book of Automobiles’ (it allegedly had a television! A television!) and was the cause of many a sad glance towards the family Ford Cortina.

Sadly, the concept proved a cul-de-sac. Of the Panther Six, only two were made; the company ceased trading in 1979. The Tyrrell concept lasted a mere two years before being dropped; the Formula 1 authorities precluded the age of conformity by introducing an official ‘you can only have four wheels on your racing car’ rule in the eighties.

They may have been a fleeting moment in British car design. But the six-wheeler fully deserves its place as a Best of British Icon.