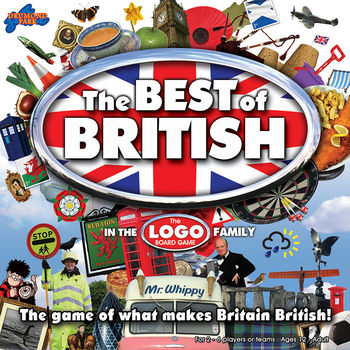 Best of British Board Game Rules

A game for 2 teams of any number or 2-6 individual players.

The Team Game is great when you have a mix of younger and older players. It makes best use of everybody's knowledge. The individual game is great if you want to be more competitive.

Unfold the board and lay it on the table. Each team selects a playing piece and places it on the Start Space on the board.

Split the players into two teams. The oldest player in each team will become the first Question Master for their team. The team containing the youngest player will start.

There are four questions on the back of each card. The first question is beside the Red Square followed by the White, Blue and Green.

There are three kinds of question cards:

Picture cards - on which there is a picture that the questions relate to.

Common Theme Cards - on which all the answers have a common theme.

Pot Luck Cards - on which there are random Best of British questions.

After the first four spaces the colour order becomes random so just answering one question correctly can sometimes mean a big leap forward.

The Question Master for the team containing the youngest player picks up the first Question Card from the box making sure the answers are concealed from all the players on both teams.

If at anytime a question is answered incorrectly then the Question Master can put the same question to the members of their own team for a bonus move. If they answer correctly they move their own piece onto the next space on the board that matches the colour of the question. The original team is always given the first chance to answer each question. After the Green Question has been played the card is placed to the back of the card box.

The Question Master for the other team now takes out the next card from the box and plays the card to their opponents in the same way.

When any team answers a question correctly and there are no spaces left matching that colour left on the path, they move their piece directly into the Winning Zone.

The oldest player becomes Question Master for the first game and asks the first card to the player on their left. The bonus opportunity for any incorrect answer passes firstly to the next player to the left and so on. The order of play then continues in a clockwise direction.