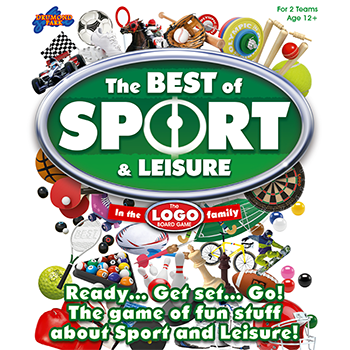 Picture Cards – on which there is a picture that the questions relate to.

Pot Luck Cards – on which there are general knowledge SPORT & LEISURE questions.

Common Theme Cards – on which all the answers have a common theme.

The four questions each have a different coloured block beside them, that relate to the coloured spaces on the board. PURPLE then GREEN, YELLOW and RED.

There are six types of ACTION cards which allow special actions. Each team is given a random three at the start of the game, and can play each card ONCE during the game. Each team may use only one Action card per turn (a turn ends when teams switch between asking and answering).

MOVE THE GOALPOSTS – instead of answering one question on the current card, the playing team can move their piece forward onto a coloured space as if they’d answered correctly (see Right Answer). This can be used whether or not the question has been read out. Cannot be used to move forward into the Winning Zone, or inside it.

NEW BALLS, PLEASE – if the playing team doesn’t like the look of the current card, before giving an answer to the first question they can have the card put to the back of the tray and attempt the next one instead.

SIN BIN – before asking the first question, the Question Master (see Playing The Game) picks a member of the playing team to sit out the current card and not discuss answers with their team-mates until the next turn.

SECOND WIND – played by the answering team before attempting the last question on the card. If they answer correctly, the turn is kept and they carry on to answer the next card too. Can’t be used if they are in the lead on the board when using the ACTION card, or within 8 spaces of the Winning Zone.

RUN FOR THE MONEY – played by the Question Master on the team in the lead, before they answer the first question on their card. Instead of the big jumps sometimes possible by moving onto colours, each correct answer will only move them forward by one space.

OWN GOAL – played by the Question Master if a correct answer is given. Rather than moving forward to the next PURPLE space, for example, the playing team has to move back to the previous one. Cannot be used in the Winning Zone.

The board has a path from the outer ‘Go!’ space into the WINNING ZONE in the middle. The path is made up of coloured spaces that match the question colours.

The team with the youngest player plays first. During play one of the other team acts as Question Master (QM) each turn. Members of the ‘non-playing’ team take turns at being the QM.

If the playing team answers correctly, they immediately move their playing piece to the next PURPLE space on the board.

If a team is the FIRST to move onto the Winning Zone, they must correctly answer either two consecutive questions or a RED question to WIN.