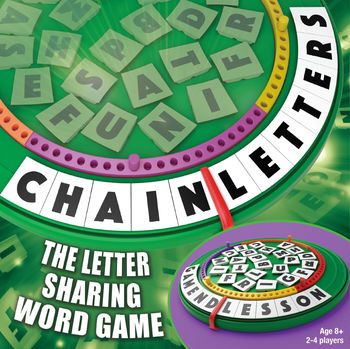 THE AIM OF THE GAME

The aim of the game is to be the first player to reach the end of the coloured scoring track, scoring 20 points. Points are gained for each letter put down on the unit but lost if used by the next player in creating their new word.

GETTING READY TO PLAY

Place the unit in the centre of the players. Randomly select 24 tiles and place them face up in to the middle of the unit. Each player selects a coloured peg and places it into the 1st hole in the matching coloured scoring track nearest them.

FOR EXAMPLE: If the first player creates the word ‘MOTOR’ she places the letters around the outer track and scores 5 (moving her scoring peg 5 spaces).

Player two then creates ‘ORANGE’, by using the last 2 letters of ‘MOTOR’ and taking tiles A, N, G, E from the centre of the unit. He scores 6 points for the word ‘ORANGE’ and moves his scoring peg 6 spaces. Player one however loses 2 points as player two used 2 letters of her word so she must move her scoring peg back 2 spaces.

Once a new word has been created, players can mark the start of this word by sliding the word marker round to its first letter.

Every time a player uses tiles to create words, the number of tiles used is replaced from the bag and placed face up in the centre of the unit.

Play continues with players making new words and placing them around the track. If enough tiles are used you will come back round to the first word created. The next player then can remove any number of old tiles required to create their new word.

The first player to score 20 and reach the end of the scoring track is the winner.