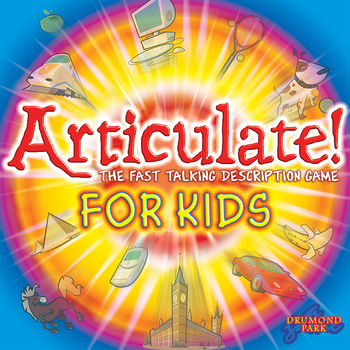 To be the first team round to the FINISH segment. Moves are made by correctly guessing what your team mates are describing.

Unfold the board and put it in the middle of the table. Players divide into teams of two or more. The more players per team the better. If for example there are eight players two teams of four is better than four teams of two. Each team chooses a playing piece and puts it on the START segment. The team with the youngest player starts.

DESCRIBERS & GUESSERS
Each turn team members decide who are going to be the DESCRIBERS. The players who are not Describers are the GUESSERS. All players MUST take their turn at being DESCRIBERS and no matter how big the team, there are never more than two DESCRIBERS.

Teams of 2 players have:
1 DESCRIBER and 1 GUESSER

Teams of 3 players have:
2 DESCRIBERS and 1 GUESSER

Teams of 4 (or more) players have:
2 DESCRIBERS and the rest are GUESSERS

(Advanced players might want to have only ONE DESCRIBER each turn, whatever the team size. This should be decided at the start of the game.)

Play starts when the timer is turned over. The DESCRIBERS take a card from the front of the pack and describe the entry beside the same coloured square as the segment on which the team's playing piece sits. As the START position is on the BLUE Object segment, during a teams first turn, they always describe the entries beside the BLUE square on any given card.

Whenever a team member shouts out the correct answer the DESCRIBERS quickly take the next card and describe the entry beside the SAME coloured square as previously. The DESCRIBERS must successfully describe as many entries as possible before the timer runs out.

When the timer runs out the turn is finished. The DESCRIBERS count the number of cards that were correctly guessed and move their playing piece forward by that number of segments. Play then passes on to the next team in a clockwise direction.

DESCRIBERS must be careful not to break any of the DESCRIPTION RULES (see below). If they break one of these rules their turn ends and they only score the cards already successfully guessed.

The first team to land on or pass the FINISH segment wins.

GOOD LUCK AND HAVE FUN!