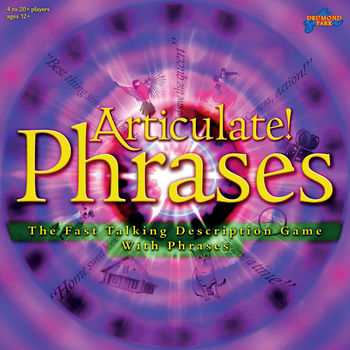 To be the first team to move from the START to the FINISH segment on the board. Progress is made by correctly guessing the phrases your team mates are describing.

Lay out the board and the card box. Players divide into teams of two or more. The more players per team the better. If for example there are eight players, two teams of four is better than four teams of two. Each team selects one playing piece and puts it on the START segment. The team with the youngest player starts.

HOW TO PLAY
DESCRIBERS & GUESSERS

Advanced players may wish to have only ONE DESCRIBER per turn whatever the team size. Decide this at the start of the game.

Play begins when the timer is turned over. The DESCRIBERS take the card from the front of the pack and start to describe the phrase whose colour matches the segment on which the team’s playing piece is sitting.

When a team member shouts out the correct answer the DESCRIBERS quickly take another card and repeat the process, using the SAME category. They keep doing this until the timer runs out, ending the turn.

The DESCRIBERS count the number of cards that were correctly guessed and move their playing piece forward that many segments. Play passes on to the next team.

DESCRIBERS must be careful not to break any of the DESCRIPTION RULES (see below). If they break one of these rules, they forfeit the turn.

When a team lands on a white CONTROL segment, play does not pass to the next team. Instead the DESCRIBERS who have just been describing take another card and describe the phrase marked to EVERBODY playing. There is NO TIME LIMIT. Play passes to the team that shouts out the right answer first. If the same team wins a second turn, the DESCRIBERS must change. During this turn the CONTROL phrases on the cards are used. After the CONTROL turn is over play passes to the next team as if that had been a normal turn.

When a team reaches or passes the FINISH segment, the DESCRIBERS must take another card and describe the CONTROL phrase on it to all the players on all the teams. TO WIN, their team must be the first to guess it correctly. If another team guesses it first, the playing team must wait until their next turn to try again; this happens again and again each turn until they win – OR another team arrives at the FINISH and wins by getting their final CONTROL question right before anyone else.

Reasonable variation in a Phrase
There are many instances of a Phrase being very similar to, but not exactly what it says on the card, “bright as a button” instead of “as bright as a button” or “you can’t make a silk purse from a sow’s ear” rather than “a silk purse from a sow’s ear”. In these instances, be sensible and if the guesser has got the saying – even if it is not exactly as it is on the card, please accept it as correct.
Key Words
During the description of a phrase there will be certain “key words” that are central to explaining the phrase. For example, in describing, “a bird in the hand is worth two in the bush”, key words would be, “bird”, “hand”, “two”, “worth” and “bush”. During the description key words cannot be used but it is OK to use simple words like, “a”, “the”, “and” or “in” despite their inclusion in the phrase. A certain amount of common sense is required here please.