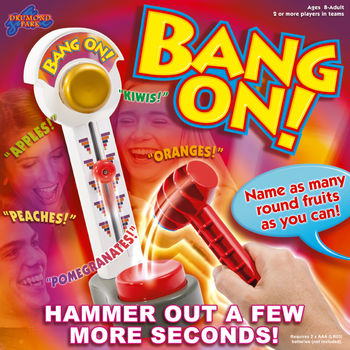 Please see the PDF for full rules including assembly and battery instructions.

Bang On is a team game. The team gets a card question - like 'name round fruits'. Every time they shout out a correct answer they bang the red button with the hammer to win another few seconds to think of another answer. If the red timer knob falls to the bottom, their turn is over. The team can score up to 10; and their playing piece is moved round the board by the number scored.

Lay out the board and the Bang On unit. Each team picks a playing piece and puts it on the RED space in front of the START ARROW. Place the deck of cards handy for both teams.

One of the three questions on each card is a BONUS Question. It lists three possible answers. These are bonus answers which win one extra point each if they are shouted out by the playing team. For example if the team shouts out six correct answers INCLUDING two BONUS answers they score 6+2=8.

The Bang On Unit

Apply the stickers using the directions on the back page.

Excessive force is not necessary to send the red knob to the top, and may damage the unit. Give the button a few test 'bangs' before starting play, to see how much force is required.

The red button should be hit straight down, if struck at an angle it may not depress fully enough to give the players extra time.

Turn on the unit using the ON/OFF switch. The team with the youngest player goes first. One team member is picked to be the BANGER for that turn and holds the HAMMER. The other team takes the top card from the pile. They ask the question of the same colour as the playing team's current board space. The playing team's BANGER hits the red button to start their turn. Every time the playing team shouts out a correct answer they must bang the red button again with the HAMMER. The red knob shoots up the column to give the team a few more seconds to think of another answer. The button is hammered again and again as the answers are shouted out until the team scores ten OR the red knob drops to the bottom of the column - which ends the turn.

FOR EXAMPLE: If the team can't think of ANYTHING, the red knob will drop to the bottom after the first hammer blow and the turn will be over. It is important that the non-playing team has one player counting the answers given by the playing team.

- If the Challenge IS correct, the playing team scores only the points they accumulated before the incorrect answer.

- If the Challenge is NOT correct - the playing team moves along the board by the points they scored before the Challenge THEN gets another turn with a new question based on the new space.

After the Challenge the asking team gets the Challenge Card back and can use it again - as often as needed during the turn. BEWARE this can lead to some people abusing the Challenge - using it TOO MUCH - which just spoils the game for everyone.

EXTRA BANG. If a team starts their turn while on this space, they can get ONE FREE bang of the HAMMER if they cannot think of an answer. This wins another few seconds to come up with another answer.

BUST SPACES. If a team starts its turn on a 4 or bust, 5 or bust or 6 or bust space, the playing team must score at least that number to score any points at all. For Example, if the playing team are on 5 or Bust, and they score 7 - they can move 7 spaces. If they only score 4 they get nothing.

GAG A PLAYER. If a team starts their turn on the Gag a Player space, the asking team can read the question and pick one player in the playing team who is not allowed to answer at all that turn.

DOUBLE YOUR SCORE. If a team starts their turn on the Double Your Score space they double their score for that turn.

DOUBLE BONUS. An ADDITIONAL point is given for each BONUS answer, for example if the team shouts out six correct answers INCLUDING two BONUS answers they score 6+4=10.

The first team to land on or pass the Finish space wins the game.