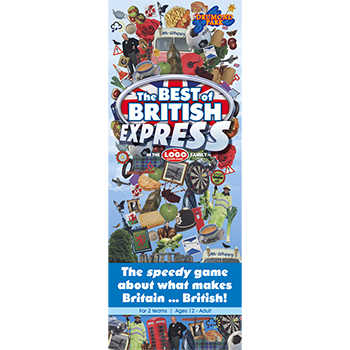 Lay the board on the table and split the players into two teams. Each team selects a playing piece and places it on the START space on the board. Unwrap the cards and place them in a handy pile with their backs (i.e. the side that shows a picture, theme or ‘Pot Luck’) uppermost.

The oldest player in each team will become the first Question Master for their team. The team containing the youngest player will start.

There are four questions on the front of each card. The first question is above the Red band, followed by Light Blue, Dark Blue and Green.

There are three kinds of Question Cards:

After the first four spaces the colour order becomes random, so just answering one question correctly can sometimes mean a big leap forward.

If at any time a question is answered incorrectly then the Question Master can put the same question to the members of their own team for a bonus move. If they answer correctly they move their own piece onto the next space on the board that matches the colour of the question. The original team is always given the first chance to answer each question.

After the Green Question has been played the card is placed to the bottom of the pile.

The Question Master for the other team now takes the next card from the pile and plays the card to their opponents in the same way.

All team members take turns at being the Question Master during the game.

When a team answers a question correctly and there is no space of its colour left to move to, they move their playing piece onto the WINNING ZONE. Their turn is then over even if there are more unanswered questions on the card. During following turns the team remains here until it answers all the questions on a card correctly to win the game. Both teams may end up in the WINNING ZONE, taking turns to try and answer a complete card correctly to win.