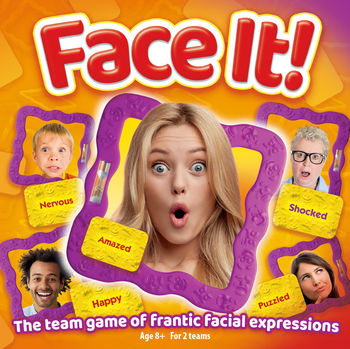 Divide into two teams. The team with the youngest player goes first. (Remember to shuffle each of the decks before play starts.) Teams take it in turn to play a round with the frame.

Each time it is a team’s turn, team members take it in turn to be the “expresser”. This player picks up the Face It frame and holds it so that the sand in the timer all runs into the bottom.

When the team is ready the player turns over the frame so that the timer starts running out and puts it in front of their face. They immediately pick up a card, noting the printed expression and holding it up to show the hint letter on the back to their team mates. They must start trying to make this expression and their team mates must guess it – with the first letter as their only hint.

As soon as the team guesses the expression the expresser picks up another card and repeats the process – as often as possible before the timer runs out.

The team keeps the cards they guess correctly. At the end of each turn any unguessed cards are put at the bottom of the deck.

Agree before play starts if adults and / or kids can “pass” on cards they find too difficult during the game. If there is one brilliant player amongst beginners that player may be banned from passing by common consent.