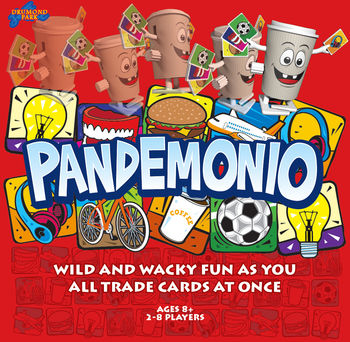 Please see the PDF for full rules including assembly instructions.

AIM OF THE GAME

To be the first player to travel up the board AND back again to your starting space. During a turn players swap cards with each other (always equal numbers of cards, face down) to try and collect as many as possible that match the picture that their playing piece is sitting on. They then move up the board by the number of matching cards collected. There are two levels of play: PANDEMONIO and SUPER PANDEMONIO. In PANDEMONIO players only collect cards matching their board space, whilst SUPER PANDEMONIO introduces a nasty TWIST which makes playing even more exciting.

There are eight different pictures on the board and cards. Coffee Cup, Headphones, Aeroplane, Burger, Lightbulb, Football, Teeth and Bike.

From the pack the dealer picks out the same number of cards of each picture as there are players. For example: For five players the dealer takes five of each picture card from the deck and sets the rest aside. So you are playing with 5 x 8 = 40 cards. These cards are shuffled and dealt. Each player should receive eight cards.

Remember - during each turn of frantic card swapping you are trying to collect the cards with the picture your playing piece is sitting on and get rid of the rest. Wind up Colin the coffee cup and set him off down his track in the middle of the board. All players immediately start to swap cards with each other. Cards are ALWAYS swapped face down. Players call out the number of cards they want to swap. The number of cards given and received in a swap MUST ALWAYS be the same. REALLY go for it, call out over other players, fight for YOUR swap. Be shy and you will lose out!

You can swap any mix of cards and as often as you like until the time has run out.

You DON'T HAVE TO swap with anyone, and you can stop swapping when you have the best hand you think you can get.

When Colin the coffee cup reaches the end of his track everybody lays down their cards face up for the others to see. Everyone moves their playing pieces forward by the number of matching cards collected. If anyone has no matching cards they must stay where they are on the board and try again next turn.

As soon as everyone has moved, pick up your cards, set Colin off again and begin another round of swapping. Players must now get rid of their old cards and collect cards that match the new board square their piece is now sitting on.

The first player to get all the way back to land on or pass the start line wins.

Like PANDEMONIO this is played in wild card-swapping sessions timed by Colin. UNLIKE PANDEMONIO you are trying to collect a maximum of 5 cards that match the space on the board where your playing piece is sitting AND 3 Bonus cards

PICTURE CARDS - cards that match the board square on which you playing piece sits.

BONUS CARDS - Three-of-a-kind of any OTHER card. You have eight cards so you must try to collect up to five Picture Cards AND 3 Bonus Cards.

PLUS if you have three-of-a-kind BONUS CARDS, you win two bonus spaces which you can use to move yourself forward OR an opponent BACK.

To sum up, you can move a maximum of seven squares (5+2) with a perfect hand of five Picture and three Bonus Cards. In a four-player game the top score is 6 (4+2) as there are only four of each Picture Card.

THE KEY TO SUPER PANDEMONIO

The way to win at Super Pandemonio is to keep an eye on Colin's progress along his track. If - near the end of a swapping session - you have collected three Bonus Cards but only three or less Picture Cards, you must make a fast decision - do you try to collect MORE Picture Cards - or do you get rid of some Bonus Cards to avoid the 'back two places' penalty? Go for broke or play safe? It's your decision!!

The first player to "crown" their playing piece and move back down the board to land on or pass their starting picture square wins.