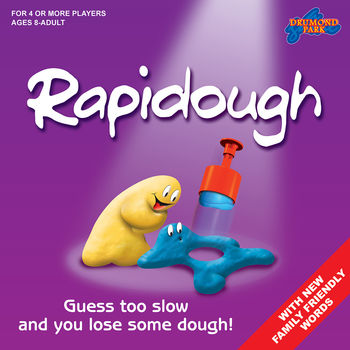 Rapidough is suitable for ages 8 and up and is played with two teams.

There can be as many people in a team as you like and it is not necessary to have exactly the same number in each team, so everyone can play!

To be the first team to guess a word being modelled by one of your team mates before another team guesses their word and gets to STEAL a plug of your dough.

Players then divide themselves into two or three teams.

Each team chooses a colour: Yellow, Red or Blue. They then take the corresponding Dough, Dough Mat, Modelling Tool and Dough Plugger and each selects a Modeller for the first round.

Team members take turns at being the Modeller. The rest of the team are the Guessers. A Modeller only wins a round when one of his own team mates guesses the correct word. If a competitor shouts out the right word, the modeller should ignore it.

There are three types of card regardless of whether the card is Blue or White.

1 - CARDS WITH ONLY ONE WORD
All Modellers must model this word. Modellers will be modelling the same word as each other.

2 - CARDS PRINTED WITH THREE WORDS
The Modellers may choose the word they feel is easiest. Modellers do not have to tell each other which word they have chosen. Modellers may be modelling the same or different words.

3 - CARDS PRINTED WITH TWO WORDS, EACH ON A DIFFERENT COLOURED BACKGROUND
Each Modeller must use the word on their team's colour. (On these cards the words are similar in nature e.g. Bagpipes; Octopus.)

The following rules need to be agreed by mutual consent prior to the start of the game.

Can Modellers animate with their model - e.g. a plane can be made to fly.
Can they use their model on their body - e.g. to demonstrate, "bracelet".
If these rules are not allowed then the Modeller must model without animation or the use of the body.
Gestures and actions not involving the model are NEVER allowed - including "mouthing" words toteam mates.
Make sure all players know the agreed modelling rules!
Hint! - Some words can be diffcult to model, so try association. For example for the word 'Farmer', try making a simple tractor and placing a figure on it.

Make sure all players know the agreed modelling rules!

One of the Modellers takes the top card from the chosen pile (Blue or White), making sure that nobody sees the front of the card. They decide, if required, which word they are going to model and pass the card to the Modeller/s in the other team/s. Once all Modellers have chosen their word they roll their dough into a rough ball and place it on their mat on top of the X. They then place their hands on the hands outline on their mat.

After an agreed few seconds of thinking time, someone shouts 'go' and the Modellers begin modelling their word, i.e. Modellers are modelling at the same time.

During this time the Modellers are only allowed to say 'yes' or 'no'. They may not inscribe letters or drawings onto the dough unless they are enhancing the sculpture, nor may they point to any objects in the room to assist their team. They can only do what was agreed at the beginning of the game (see Modelling Rules).

A round is won as soon as a word is guessed correctly.

There is no time limit on a round. In the unlikely event that no team guesses right after a long time, the round can be declared void by mutual agreement. Replay the round with a new card.

If both teams guess correctly at the same time, replay the round with a new card.

The stolen dough is put into its plastic container. Do not mix up the dough colours.

With TWO teams, when one team runs out of dough, the other team wins.

With THREE teams, when one team runs out of dough, the team with the most dough left wins.

2. Pull the plugger out to its full extent

4. Push the plugger right through to the other side of the dough.

5. Press the plugger down to force out the dough plug.

The dough used in this game is water based and as such will dry out after extended periods of time. However, kneading with small amounts of water or vegetable oil can easily restore it. The dough should be kept in the containers with the lid securely fastened.

The dough may cause stains on clothes and carpets, these can usually be removed with soap and water but are best avoided. The dough is non-toxic but should NOT be eaten under any circumstances.

The contents of this game are only to be used for the purpose and in the manner described in these rules and no liability will be accepted for misuse or if the components are used for any other purpose.