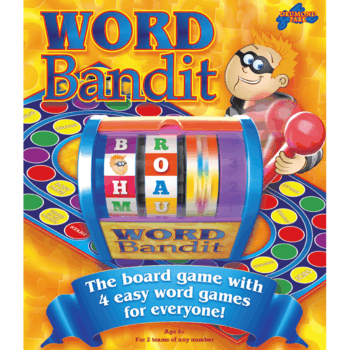 Your board space dictates which of the four games your team will play. The team pulls the handle to spin the wheels and the opposition counts the score. The first to get to the end of the track wins.

Lay out the board and the Word Bandit unit. Apply the rectangular sticker to the unit’s front as shown on the back page of these instructions. Each team picks a playing piece and puts it on the red START space.

There are 4 Word Games to Play:

Open the sliding cover on the machine to uncover four rows of letters, then pull the handle to spin the word wheels.

The aim of this game is to find as many words as possible that wind around the grid of letters. The letters of these words must follow-on one to the next either sidewise, up or down or diagonally. A word can be spelled in any direction, top to bottom, bottom to top left to right or right to left.

Uncover three rows of letters, then pull the handle to spin the word wheels. In this game you must find the INITIALS of as many famous people as possible during one turn of the timer. The letters do not need to be touching in the grid.

Uncover two rows of letters, then pull the handle to spin the word wheels. Your playing piece is on a yellow space with a category printed on it. You must think of as many words as possible that are in that category that begin with one of the letters on show. You can use any letter as many times as you like as long as the words are different.

Uncover one row of letters, then pull the handle to spin the word wheels. In this game you have to call out as many words as possible that contain any 2 of the letters that you have spun. The letters contained in your words can be in any order. Repeating the letters in your words is okay. For clever clogs you must think up words with all three letters in them.

The team with the youngest player goes first. The non-playing team keeps score of the correct answers during each turn.

At the start of each turn the playing team moves the sliding cover to reveal the right number of rows to play the game which matches the colour their playing piece is sitting on. They then pull the lever to get a new set of random letters. At the START of the game this is the RED SPACE - the one row game of WORDS CONTAINING. See rules above.

Once the Word Bandit wheels have stopped spinning the opposing team starts the timer and the playing team has to shout out as many words as possible in the chosen game.

It is VERY important that someone from the opposing team keeps count of the number of correct answers.

The playing team moves their piece along by the number scored and play moves to the other team.

If the face of the Word Bandit appears instead of a letter then your team has one LESS letter to play with that turn!! He has stolen quite a few possible words from you, but you have to carry on regardless. He can in fact turn up on two or even three wheels – if he is really cheeky. If the Word Bandit appears on three wheels in a one or two row game the playing team gets another free spin of the word wheels.

The first team to land on or pass the FINISH space wins the game.

Please see the full PDF instructions for examples and further information about the game unit.