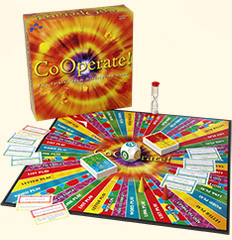 Hi and welcome to CoOperate Micro Game expanded rules. CoOperate is the best game we have test played since Articulate and it is indeed a cousin to Articulate with similar time pressure, quick thinking and quick talking at its heart.

The general idea of this game is that a team gets 30 seconds to discuss and estimate how many correct answers to the Challenge on the card they will shout out, THEN another 30 seconds to all shout out those answers until they reach that score.

If they get the right number they move – if they don’t they score nothing.

The more detailed rules for your Micro game are as follows.

1. Divide all players into two teams. Pop-out the cards, board and rules. Place the board in the middle of the table. Put the two types of cards (red/blue backed and green/yellow backed) in piles on the table – “question” side side down.

2. Each team selects a playing piece from the game in which you received this Micro game and put them on the twin starting spaces on the board.

3. There are four kinds of Challenge in the game – each a different colour.

a) WORD PLAY (Blue) – players must shout out words that have letters or elements in common. For example – “words ending “…ock”, or “words starting with S and ending in T”

b) LINK PLAY (Green) – words that are linked to the previous player’s word. These are often in pairs with one player shouting out one of the pair and the next player the other. For example, “First a country next its capital” means that one player names a country the next player names its capital, then continue this theme in subsequent answers – each team member only ever saying ONE of a pair).

d) DESCRIBE PLAY (Yellow) – players must describe to the rest of the team a word defined in the Challenge (like “Describe a well known actor”) so if a player decides to describe Tom Cruise they might say – “Starred in Top Gun”.

5. The team uses a challenge of the colour their playing piece is sitting on, so the first Challenge at the start of the game is always GREEN.

6. One player must use the count down timer on their smartphone to time 30 seconds.

7. Decide which team will start by common consent.

1. The team picks up a Challenge card whose back shows the colour that their piece is sitting on and a team member reads out the Challenge.

2. When the Challenge has been read (perhaps twice if you’re all feeling generous), the opposing team starts the 30 second count-down timer.

3. The Playing team has this 30 seconds to discuss and decide how many answers to the Challenge they can shout out in a further 30 second turn – this is their TARGET number. They cannot mention ANY words that meet the Challenge during this discussion. If they DO mention a Challenge word OR if they have not stated a TARGET number by the end of 30 seconds their turn is over and the other team starts their next turn.

4. If they DO state a TARGET number the opposing team IMMEDIATELY starts the 30 second timer again and the team members must shout out answers to the Challenge as fast as possible to meet their stated TARGET. The opposing team keeps a count of the correct Challenge answers shouted out.

No team member can shout out more than one answer in a row. They must wait for at least one other answer from another member of the team before shouting out another answer. As a result two members of a team can theoretically play the whole turn – although this is rarely the case in reality.

If the team reaches its TARGET number – they move round the board that many spaces. This ends their turn.

If the team DOES NOT reach their TARGET number, they SCORE NOTHING. This ends their turn.

The first team to land on or pass the final central space is the winner.

From loads of test playing, we have found that you will generally aim too high in your target number. It is always better to score a few less than you might otherwise do and be guaranteed to move along the board every turn. The hesitation of time pressure and confusion of random shouting can really restrict your scoring until the team has become used to the format of the game.