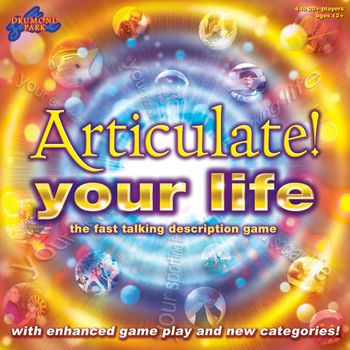 OUTLINE OF THE GAME

Teams compete to be the first round the board by guessing words that their team-mates describe during turns that vary in length.

Unfold the board and place the two sand timers in the centre.

Each team selects a playing piece and puts it on the 'START' segment.

On its turn, the current team divides itself into DESCRIBERS and GUESSERS.

Every player must take their turn at being a DESCRIBER during the course of the game.

No matter how big the team, there are never more than two DESCRIBERS at a time. Once familiar with the game, teams may wish to use only one DESCRIBER.

Each segment on the board is marked with a timer icon.

If the icon is red, the 20 second sand timer sets the limit for that turn.

If the icon is blue, the 30 second timer is used instead.

If the icon shows two red timers, the 20 second timer is turned over when it first runs out, giving the team 40 seconds in total.

The colour and name of the segment on which the team's playing piece sits shows which category of words is to be described. For instance the START position shows 'HOME LIFE', so a team's very first turn would involve the pale brown card entries only. The segment's timer icon gives the time allowed for this turn.

A team's turn begins when one of their DESCRIBERS rolls the BONUS DICE. The sides are numbered 3 - 8 and this determines the team's BONUS TARGET. A member of an opposing team then sets the appropriate timer.

A DESCRIBER immediately takes a card from the front of the pack and describes the relevant colour word or phrase to their own team. When one of the GUESSERS shouts out the correct answer, the DESCRIBERS quickly take the next card and repeat the process using the SAME category.

When the timer runs out the turn is finished. The DESCRIBERS count the number of cards that were correctly guessed and their team's playing piece is moved forward by that many segments.

If this number of correctly guessed cards equals or exceeds the BONUS TARGET, the team adds two bonus segments to their move.

The segment that the playing piece finishes its move on dictates the category that the team will play in the following turn.

Used cards are now returned to the back of the pack and play passes to the next team.

If a team lands on the MAX TIME (white) segment, they can choose which category to play. The team gets 40 seconds for this turn (the 'two red timers' icon).

The first team to land on or pass the FINISH segment WINS.

For a longer game, use the ENTERTAINMENT category on the Finish segment and make a second lap of the board.