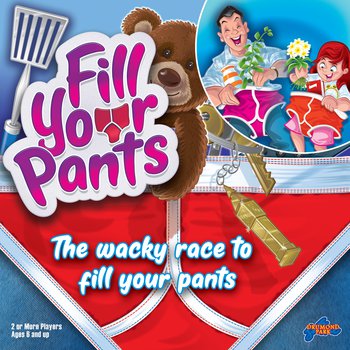 2 or More Players
Ages 6 and Up

This game is played in pairs. If there are more than two players, take turns to pair up with one of the others.

The first pair to play each puts on a pair of the large pants.

Place the cards in an easy-to-reach pile, face down. The surface that the cards are on is called THE BASE.

Decide how many cards you are going to play. For a short game take 5 or 6 cards, for a longer game use around 12 cards. Count out the number of cards in one pile.

The player with the highest card score once all players have had their turn wins. A draw can be decided by a final round played by the drawn players.

Each player takes a separate pile of cards and puts them face down on the BASE.

Five cards each is a short game, decide on a larger number for a longer game.

This game is an active and physical game. It involves dressing up, running around and collecting objects. There are therefore some important precautions to take: Please ensure the area is safe and suitable for play by removing trip hazards and fragile items. Very small children and pets should also be kept away.

Do not collect items that will be damaged or have the potential to cause injury.

Do not sit down with objects in the pants. Exercise care and attention at all times.

Pants not intended to be worn next to the skin.