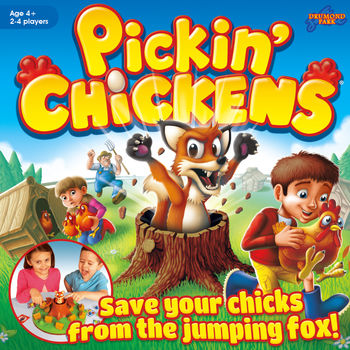 The Aim of the Game

Young Chicks Game - To be the first player to collect four chickens of any colour, by spinning the Field Circle and picking which coop to look under each turn.

Older Chicks Game - To be the first player to collect one of each of the four coloured chickens: 1 x Red, 1 x Blue, 1 x Yellow and 1 x Green.

The youngest player starts by holding one of the four bushes around the edge of the Field Circle and giving the whole Field Circle a good spin in the direction of the arrows beside the bushes.

Once the Field Circle has stopped spinning, players take it in turn to pick up a chicken coop, starting with the player who spun, then the person to their left and so on.

Under a Chicken Coop a player will find a picture of either a Chicken or the Farmer. If a Chicken is shown, the player takes a model chicken of the same colour from the pile and puts it on one of the white chicken spaces on their card.

If there are no model chickens left of that colour, the player does nothing that turn.

If the Farmer is revealed, the player takes the Farmer card from whoever has it at the moment.

Every player must take a chicken (if they can) or the Farmer card before the next player lifts their own coop.

After every player has taken what they can, all the coops are plugged back into their holes and the turn is finished. The next player to the left begins a new turn by spinning the Field Circle.

The first player to collect any 4 model chickens is the winner.

If the fox jumps out of his tree trunk, each player loses one of his chickens ... unless they hold the Farmer card. The Farmer card protects its holder from losing a chicken.

Once all the other players have put one of their model chickens back onto the pile, the fox is pushed back into his tree trunk.

The player holding the Farmer Card puts it back beside the model chicken pile. The next player now spins the Field Circle to start a new turn.

The Farmer card starts the game beside the pile of model chickens, and is always passed to the person who has just found a Farmer picture - even if the person holding it has not used it yet.

The Farmer card can only be used once to save you from losing a chicken to the fox - then it must be returned to lie beside the model chicken pile, to wait for the next person who finds a Farmer picture under their coop.

Play as for the Younger Chicks, but turn the chicken cards over and use the side which shows coloured chickens.

The only difference is that players must cover each coloured chicken picture with a model chicken of the same colour.

If a player uncovers a chicken of a colour they already have, they can't take another of the same colour - whereas in the Younger Chicks game, players may collect any mix of coloured model chickens to win - maybe even four reds.

The first player to collect one of each of the four different coloured chickens is the winner.

The Key to the Game

When you spin the Field Circle, the pictures of the Chickens and Farmers beneath it do not move. So if a chicken coop ends up over the same spot on another turn, you might know what's there and whether you need it or not. Remember what's under the spaces where coops have been lifted, and you'll get what you want faster and be more likely to win!