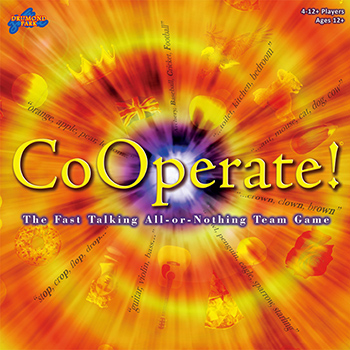 In its turn each team reads out a Challenge from a card that matches their playing space. They have one turn of the timer to discuss and decide on a TARGET number of answers to the card Challenge that they will be able to shout out together – in 30 seconds. The timer is then turned again and if they shout out that number of correct answers in the next 30 seconds, they move round the board by that number. If they don’t, they score nothing.

Lay out the board and place two piles of cards on their respective card spaces face down – 30-40 cards of each colour will be enough for a whole game - add the coloured stickers onto the dice and place in the middle of the board.

Each team picks a playing piece and puts it on the GREEN start arrow space.

The team with the youngest player starts.

One of the playing team takes a card, whose back shows the colour their playing piece is sitting on, and reads out the Challenge outlined by that colour to the team – perhaps read it a couple of times if required.

As soon as the timer runs out the opposing team turns it over. The playing team members now shout out answers to the Challenge as quickly as possible. Players cannot shout out words used as examples on the cards. Any wrong answers are ignored. The opposing team keeps score of correct answers.

A few LINK play Challenges are not in pairs, these score one for each answer.

If the team reaches its TARGET number it moves round the board by that number, if not it stays put. The team cannot score MORE than the TARGET number.

If a team misses a turn for any reason they play the same colour again the next turn.

The first team to land on or pass the START space wins. Players can decide to complete two circuits of the board if they want a longer game.

The three ways to play are:

Everyone shouts out answers as quickly as they can – except that no player can shout out two answers in a row. So in theory two players – taking turns – could answer for a whole turn. Keeping score for this can be a bit tricky.

The players take turns at giving an answer, round and round the team in the same sequence with anyone being able to PASS whenever they want to.

As with Order, but no player can speak (apart from the first player) until the previous player in the sequence has shouted out a CORRECT answer with no help from the others - not for beginners!

There are two kinds of BONUS: “MOVE ON” and DIMPLE BONUS

MOVE ON – the team throws the die as soon as they land on the MOVE ON space. They then move on to the next space of the colour thrown. Play this colour as normal next turn. If you throw a grey, roll again.

DIMPLE BONUS - If the dice lands on one of its corner dimples move forwards FOUR spaces immediately – then your turn is over.

In LINK PLAY there are normally pairs of things to say, one following the other, always said by two different players. You score one point per completed pair. Some LINK PLAYs are sequences of things that rely on the last word, like, “Items smaller than the last player’s item”. These score one for every word.

WORD PLAY gives a simple rule that all words spoken must follow – like “Words with a double O”, or “Words starting in D and ending in E”.

In DESCRIBE PLAY players must describe things that have something in common like, “Body parts”. When describing don’t use “Starts with, sounds like or do ANY gesticulating. Describe using only words.