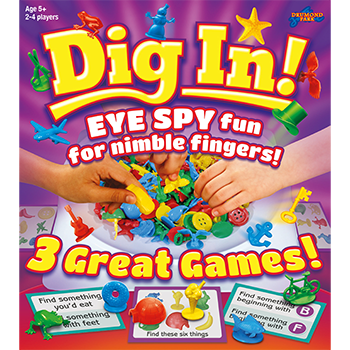 Dig In the bowl and find all six pieces shown on your Dig In card. During a round you each get 30 seconds of digging on your own using both hands, then everyone Digs In, at the same time using only one hand each. The first player to find the six figures on their Dig In card is the winner.

Shuffle the cards and give one to each player figure side up. They place their card beside them so they can easily see which 6 figures they must try to find in the bowl. Place the timer next to the bowl.

Put all the Dig In figures into the bowl and mix them around. Play moves clockwise starting with the youngest player.

The first player (the youngest player) turns over the timer, which gives them 30 seconds to find as many of the pieces on their card as they can – using BOTH hands! Once found, a piece should be placed onto its picture on the card.

The next player watches the timer and as soon as it runs out they shout “Hands out!” then they turn over the timer and start their two handed turn. Play continues like this until all players have had a two-handed turn.

Now ALL players DIG IN at the same time searching for the remaining figures that they need to complete their card – but now they each use ONLY ONE HAND.

If one player sees another player using two hands, they must shout out that player’s name. That player is then out for the rest of that round.

For the ‘ALL-IN’ stage there is no time limit. If two or more people pull out their sixth piece at the same time, they both win the round. The winner or winners of the round keep their card, the others players’ cards are placed at the bottom of the card pile.

If a player finds all six of their figures in their 30 second two-handed turn they win that round and keep their card. As soon as someone wins the round, a new round starts with a new card for each player.

The first player to collect three cards wins the game.

THE DESCRIPTION GAME (GAME No.2)

Lay out a different set of coloured figures in front of each player. The umpire calls out a Description from a Dig In card. Players race to be the first to identify one of their figures that matches the description. After each Description is called out, the first player to pick up a matching figure keeps it and places it to the side. The first player to collect six figures wins the game.

Each player gets one set of coloured figures and sets them up on the table in front of them.

Decide who will be the first umpire, this person takes the top card from the pile.

You cannot grab one of the figures you have already picked up and kept towards your score.

With one umpire for the whole game, play two rounds per player (eg. For three players, play six rounds).

The person who has collected the most figures wins.

You can extend the game by playing until each player has had three or even four turns at being umpire – just make sure you all agree on this before you start playing.

THE ‘SOMETHING BEGINNING WITH’ GAME (GAME 3)

Lay out ALL the figures of all four colours (128 figures) in one big mixed up group in the middle of the table – in reach of all the players. The umpire calls out one of the letters from the Dig In card. The first player to grab a figure that can be described by a word starting with that letter keeps the piece as their score. The first player to collect 10 figures is the winner.

Other than the fact that all pieces are laid out in the middle of the table for everyone to use, and the umpire calls out letters rather than descriptions, the rules are the same as for the Description game.

Just remember that many of the figures might be called – or described as - different things. For example, a ROCKET starting with R could also be a SPACESHIP (S), or a MISSILE (M). An EAGLE (E) is also a BIRD (B) or even a RAPTOR (R). This is where the players’ creativity and imagination really come into play.

You must find the matching 6 figures in the correct colour. To make the game simpler you can allow younger players to find the six figures but in any colour.

For Game 2 there is a Description that is used (see GAME 2 rules above).

For Game 3 there is a First Letter that is used (see GAME 3 rules above).