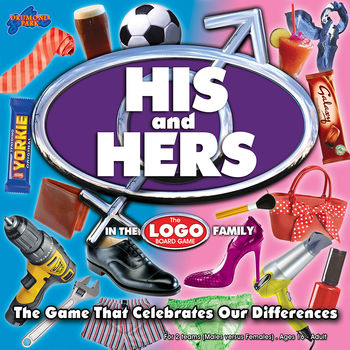 His and Hers Board Game Rules

A game for 4 or more players in two teams of guys and girls over 16 years old.

Unfold and lay out the board.

Divide into a guys' team and a girls' team.

Picture Cards - on which there is a picture that the questions relate to.

Theme Cards - on which all the answers have a common theme.

Pot Luck Cards - on which there are random questions.

Each card has four questions on the back.

Each team must follow its own side of the track.

On each turn, a team might be asked a question from a pink OR a blue question card. This is decided by the colour of the small oval on the playing space that the team's piece is sitting on at the start of the turn.

For its first turn each team is asked one of its 'own' question cards - blue for guys, pink for girls. The guys toss to see which team starts.

The Question Master of the non-playing team picks the first Question card from the front of its section in the card box. They must not let their own team see the answers in case their team gets a chance to STEAL a question if the playing team gets one wrong.

What to do with each type of card before asking the questions:

Picture Card - show the picture to all players on both teams.

Themed Card - read out the theme to all players on both teams.

Now the Question Master reads out the first question to the playing team. If they get it right they immediately move their piece to the next space on the board that matches the question's colour.

If a team gets a question wrong the Question Master puts it to the members of their own team. If they answer correctly they move their own piece to the next space on their own playing track that matches the colour of the question.

The playing team is always given the first chance to answer each question on the card.

After the last question on the card has been played, the card is returned to the back of its section in the card box and the other team takes its turn.

If a team cannot answer a question on a card of the opposite sex they can pass it to a nominated player on the other team - who they think will get it wrong! If this player DOES get it WRONG the playing team moves their piece onto the next playing space matching the question's colour. If the nominated player gets it RIGHT they move THEIR team's playing piece to the next space that matches the question's colour.

Each player can only be nominated once per game.

Near the end of the playing track, when a team answers a question for which there is not another coloured playing space, they move into the Winning Zone (the central His and Hers logo). They continue to answer the rest of the questions on the card. To win they must correctly answer either:

If they do not win with the remaining questions on the card, they must wait for their next turn to try again.