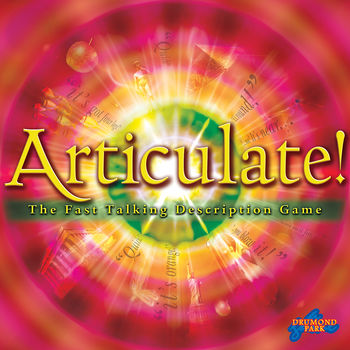 Welcome, Articulate players! This page gets a lot of traffic, and you’ll be here for two reasons:

a) You’ve just opened the box and… boooo – the dog has eaten the instructions.

In which case, we have those ‘how to play’ step-by-step points below. Agree any ‘house rules’ in advance; remember that you can properly involve younger ones by letting them use the cards from ‘Articulate for Kids’ (which integrate with the ‘classic’ game, as well as working standalone); and don’t forget to tell the world about your team mates’ most hopeless definitions, by using the hashtag #playarticulate

b) You’re at a key point in the game, and a frenzied bust-up has occurred over a definition.

We get asked to adjudicate all sorts of things and can’t possibly cover them all here! But remember: no ‘sounds likes’ and no derivative words, even if they’re once-removed from the original (toothbrush/teeth, for instance). No sneaky mouthing, nor foreign languages.

If you can’t agree, we suggest using one of the online cards from ‘Articulate Phrases’ as a tie-breaker.

If you want an official adjudication for retrospective bragging rights, Tweet or Insta us using #PlayArticulate. We’ll convene an Articulate Grand Council meeting (take a straw poll in the office) and get back to you. Please don’t hate us if it doesn’t go your way, though.

Use the virtual Articulate cards at www.playarticulate.com

Object of the Game

To be the first team round to the FINISH segment. Progress is made by correctly guessing what your team mates are describing.

Unfold the board and put the arrow spinner in the centre hole. Players divide into teams of two or more. The more players per team the better. If for example there are eight players two teams of four is better than four teams of two. Each team select one playing piece and put it on the start segment. By common consent decide which team will start.

Each turn team members are nominated DESCRIBERS and GUESSERS. All players MUST take their turn at being describers. No matter how big the team, there are never more than two describers.

Advanced players may wish to have only 1 describer per turn, whatever the team size. This should be decided at the start of the game.

Play begins when the timer is up ended. The describers take a card from the front of the pack and describe the entry corresponding to the segment on which the team's playing piece sits. As the start position is on the OBJECT segment each team starts with this category.

When a team member shouts out the correct answer the describers quickly take another card and repeat the process, using the SAME category.

When the timer runs out, the turn is finished. The describers count the number of cards that were correctly guessed and move their playing piece forward that many segments. Play passes on to the next team UNLESS you land on a CONTROL or SPIN segment (see below for details).

Describers must be careful not to break any of the description rules (see below). If they break one of these rules they forfeit the turn.

When a team reaches the FINISH segment, the DESCRIBERS on that team must describe a CONTROL entry to everybody playing. TO WIN their team must be the first to guess it correctly. If they fail they wait until their next turn to try again. While they are waiting other teams can move them back with their SPIN BONUS places.

When a team lands on a white CONTROL play does not pass to the next team. Instead, the DESCRIBERS who have just been describing, take another card and describe the entry marked with a CONTROL to EVERYBODY playing.

There is NO TIME LIMIT. The team which shouts the answer first get the next turn. If the same team has a second turn, their next describers take their turn. After the CONTROL winners' turn, play passes on to the next team as if that had been their normal turn.

If two teams shout the answer at the same time, another card is taken and the CONTROL entry is described.

If a playing piece piece lands on a segment which extends into the centre of the board (ORANGE or RED), the team spins the spinner to win bonus places.

If the spinner stops on:

If the spinner points to an orange or red segment no bonus is won, however if there is any doubt at all because the arrow points to a line, spin again.