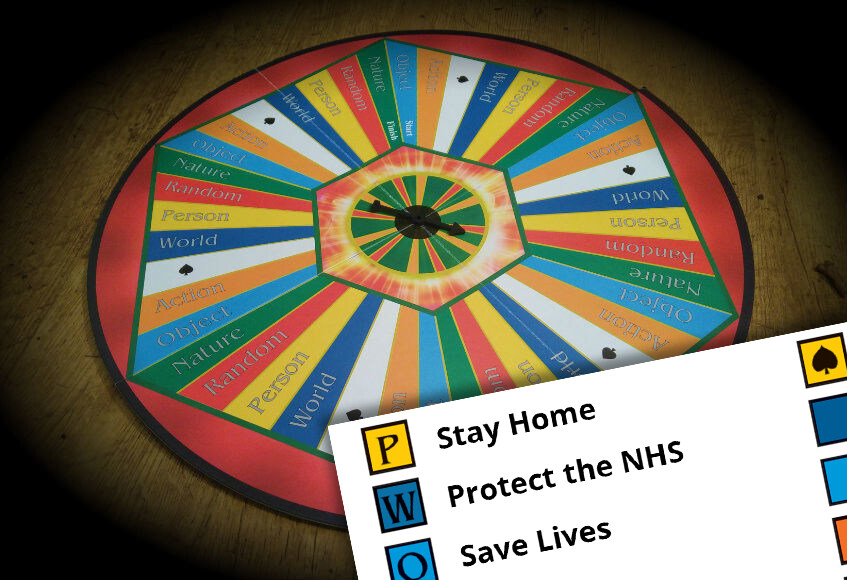 Well, there’s no denying that the past year has been a memorable one for graph enthusiasts. Trends, vertices and axes, R-numbers… News bulletins (and Facebook feeds) just won’t be the same when this whole sorry business is over.

One thing we noticed was presenters using different sources of data to draw conclusions. Estimating lockdown compliance using vehicle movements, for instance. And this got us thinking: could we discover anything using board games?

For many people, Articulate! has been their go-to family game when they’ve been stuck at home. We know this via social media, and it’s been a lovely thing to see for all of us involved with the game.

Making the virtual Articulate! cards available has proved very, very popular, and we’re chuffed that they’ve helped people out in difficult circumstances. But the use of those doesn’t tell us much in terms of trends: it was a brand-new initiative with nothing to compare it to, and its popularity was skewed and spiked every time a big organisation got wind and joined us in spreading the word. (Thank you – for example – MoneySavingExpert and GirlGuiding).

But how about looking at people who are playing the traditional board game at home?

Bizarre and dystopian as it may sound, we can form a pretty good ‘big picture’ view of when the nation is playing Articulate!

How? Because at any one time, a small but noticeable proportion of them will be looking up the rules on our website.

It’s one of the most popular pages here. Printed rules go missing all the time. Or Uncle Alan spills his drink all over them, rendering them unusable. Or – crucially – there’s a massive barney over a disputed definition, and people start Googling in order to scrape around for anything they’ve missed that might conceivably back up their argument.

Either way, these are all people who are playing – or about to play – the board game. It follows that the number of visits to that ‘rules’ page indicates when the game is popular.

This takes a similar pattern every year: that particular web page goes crazy as families get together over Christmas and the New Year; settles down; then snoozes a little over July and August when the weather’s warm and people do other stuff outside.

Let’s get back to the global pandemic. Here’s a week-by-week line representation of visitors coming here to check the rules. The vast majority of these are players in the UK or ROI. The timeline runs from January onwards, with the blue line showing the year 2020 and the orange showing 2019. Each of the blobs represents a week. We're a little shy of sharing actual numbers, but we're talking many hundreds of pageviews per week - it's a popular game.

(We’re very aware that our graphs don't pass any level of formal scrutiny – they're just screen grabs from the web stats, and not to scale with each other... we're just trying to do a quick back-of-an-envelope demonstration of the trends.)

But you get the idea. There’s a negligible difference year-on-year between 2020 and 2019. Previous years were the same.

The exact dates differed between the individual UK nations – but March 2020 saw us all lock down… and people immediately grabbed their Articulate! sets. So much so that by the end of that month, that rules page was serving three times the traffic as in previous years.

We know that lots of people were setting up remote games via Zoom, which would account for more people needing to see the rules. The 'virtual' cards launched later on, in April. Basically: gosh! That's a *lot* of people playing board games.

Lockdown eased in the summer, although fundamental restrictions were still in place. And these extra people steadily continued to play Articulate! at home, despite all that nice sunny weather.

What about the Autumn, when the virus took hold again? Our lines are a little less dramatic here – restrictions had now been regionalised, and each nation state had their own approach. Here we go from the end of October.

That third somewhat-less-than-scientific graph doesn't show so much of an obvious impact. But looking at the figures behind it, there was still a jump: home Articulate! playing had been up by steady 40% as we entered the autumn, but spiked to a 50% increase when England went into full lockdown on 5 November - between the first and second blobs. It stayed like this for a fortnight or so, before drifting back down again.

So what about THIS year? Shown below are the trends for the weeks leading up into March 2021. Hmmmmmmm.

Again, more people have consistently been looking up Articulate! rules than normal. But for the first time in a year, as we approach the anniversary of where we started, Articulate-playing looks like it’s steadily returning to pre-pandemic, everything-back-to-normal levels.

Does this tell us that people are jumping the gun? That they are putting away their Articulate! sets prematurely?

Perhaps everybody knows the rules off by heart now. Perhaps there’s been a little more ‘pottering in the garden’ weather. We do hope so.

Please do carry on playing Articulate! until Prof. Whitty et al judge that it’s safe to return your board to the games cupboard. (N.B. it may well be that there is not an EXACTLY SPECIFIC announcement from SAGE on this front.)

If you have a bit of Articulate! fatigue then we’ve loads of other things you can enjoy in the safety of your living room: Rapidough, for example, or the new Second Edition of LOGO… or one of the other games in the Articulate! family.

Until then, roll on the time when we can fold up our graphs and put them back in the computer.

Stay safe, and thank you – as ever – for playing!